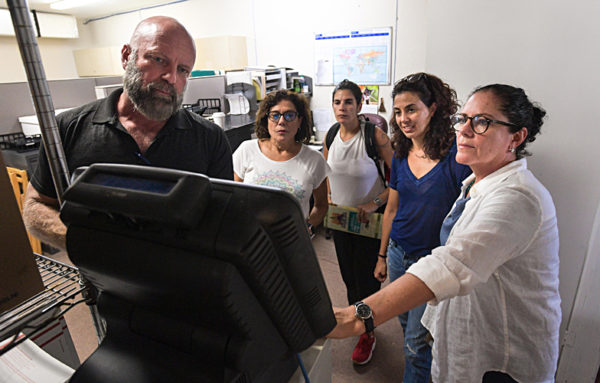 From a small city in Guatemala to a beach town in Florida, four women entrepreneurs this week embarked on a journey to learn how to expand their business and create a restaurant culture that welcomes everyone.

Each day this week, the women’s schedule was full of lectures, observation and hands-on experience with the managers and employees at the successful Daiquiri Deck chain of restaurants.

“It has been more than we expected,” said Aycinena, co-owner of Fridas Restaurant.

Daiquiri Deck opened its first restaurant in the Siesta Key Village in 1993. The company has grown substantially with four locations with a fifth location opening in Bradenton Beach this fall.

Daiquiri Deck manager Craig Charlton gave the women a guide to the leadership qualifications the company uses and talked about how the women could implement the information into their business.

“You can’t go forward until you know who you are and who you want to be,” Charlton said. “I know what it’s like to be the guy in the back, the bartender and busing tables. Being a leader takes time.”

The apprenticeship was put together by a small non-profit organization called the Business Council for Peace, or BPeace, whose co-founder and CEO, Toni Maloney, lives on Longboat Key. New York-based Bpeace’s motto is “More jobs mean less violence.”

Creating more and better jobs is what motivated Palomo to contact BPeace after hearing about the organization through her brother-in-law. Maloney got Daiquiri Deck involved.

BPeace aims to reach small-business entrepreneurs in economically impoverished countries and pairs them with volunteers, whom it calls “skillanthropists,” to improve their businesses.

“BPeace picked the people and determined who would be the best fit,” said Russell Matthes, Daiquiri Deck’s owner.

The process takes months of preparation once the entrepreneurs are matched with their skillanthropist. Phone and video calls are made to ensure that goals are met and time is maximized. Webinars are also available if traveling is not an option.

“We can do anything with enough time and money,” Maloney said.

In 2017, 135 BPeace volunteers provided $1.4 million worth of time to help businesses, she said. It is mentoring businesses in Lebanon and El Salvador in addition to Guatemala and advises 60 to 75 entrepreneurs at any one time. It works with more than 300 experts from companies such as Amazon, Morgan Stanley, PwC, Salesforce and Spotify.

“Bpeace operates quite differently than other nonprofit organizations,” Maloney said. “We operate like a consulting firm that just happens to be a nonprofit.”

The organization received five stars from GreatNonprofits. With less than $1 million in assets, it is too small to be critiqued and rated by Charity Navigator.

The owners and operators of Fridas have developed the business from three tables and four stools into a charming restaurant that seats more than 100 and has a Facebook page. But they are not content and their goals extend beyond profits to social change, particularly improvements in women’s rights and LGBTQ acceptance.

“Guatemala is a violent country,” Mondragon said. “For us, it’s very meaningful because it’s four women. We’ve always wanted to have a place that is inclusive, open and tolerant.”

“Guatemala is a complicated country in a lot of ways,” Palomo added. “I think that we were handed an opportunity that not everybody has to be in this position that we are in. So to make the best out of it and really try to be something that can impact lives in a positive way, that it was our responsibility to do it.”.

The women spoke a lot about inclusion in a country that is not often welcoming to the idea of women’s rights, LGBTQ rights and racial equality.

“They don’t want gays and they are not inclusive,” Mondragon said. “We are fighting for that right because we are lesbians. So we are not with the flocks outside and the place is not a gay place but we welcome everybody in our place.

“It’s been difficult, but people now see us for what we have worked for and who we really are.”

Palomo believes that Fridas brings a unique culture in the restaurant despite what life is like outside it.

“I think that Fridas is a place with a lot of soul, with a lot of charm, food is delicious and a lot of really cool things going on,” said Palomo. “I think that one of the things that we take pride in is that we are trying to be a space of encounter. A place where you can go and be yourself.”

The apprenticeship has made an incredible impact on both businesses, its participants said.

“I am very thankful for this opportunity for BPeace first and then Russel and Matt from the Daiquiri Deck for having us,” said Mondragon, referring to Matthew Grover, vice president and owner of Daiquiri Deck.