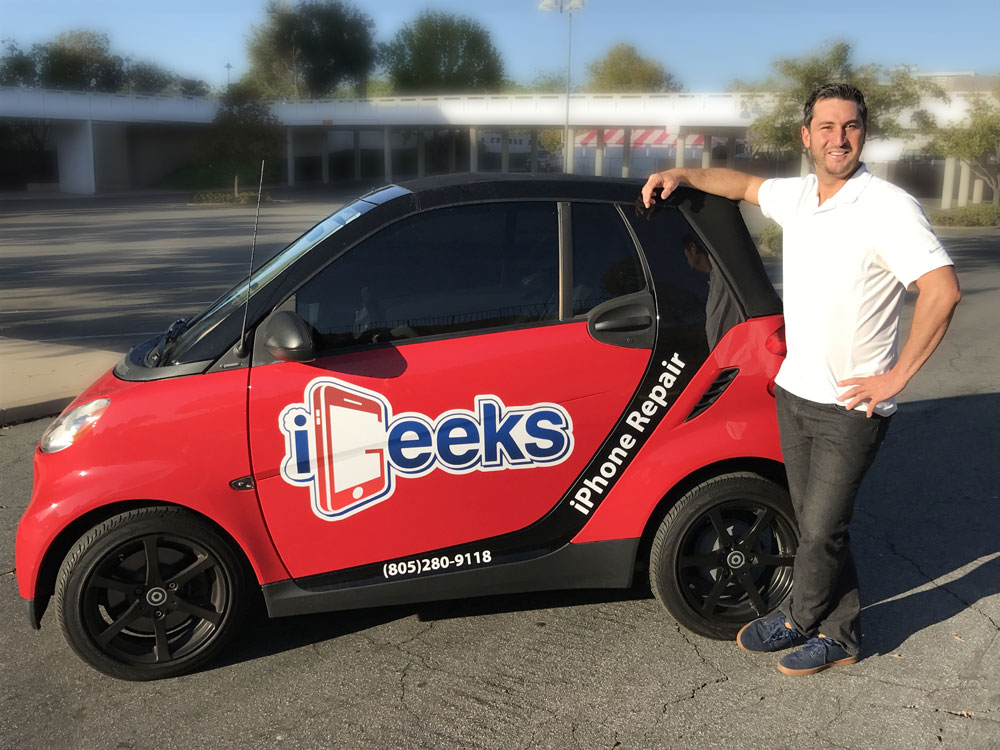 SANTA BARBARA, Calif. – Oct. 8, 2016 – PRLog — Daniel Guerrera, owner of iGeeks™ iPhone Repair in Santa Barbara, is now franchising his business – with a twist. The franchises are on wheels.

With a logo-wrapped Smart Car, franchise owners can go to their customer’s home or business and provide iPhone repair on location.

“Many parts of the country have no Apple stores at all,” said Guerrera, who opened iGeeks in Santa Barbara in 2014. “For the technology industry, this is a business model whose time has come.”

The franchise package, priced at $28,000, includes the iGeeks brand; extensive ongoing training; support, parts and supplies; a website, leads and marketing tools; and a logo-wrapped Smart Car. There are no ongoing fees. In contrast, another smart phone repair chain requires approximately $125,000 to open a franchise, and charges regular royalty fees.

Guerrera said he got the idea for mobile franchises from a Fox News “Fox & Friends” television interview about BookATailor, a custom clothing service which uses Smart Cars to do fittings on location. Having closed his struggling kiosk in the mall in favor of his current successful storefront, Guerrera was open to ideas outside of the traditional business models. He immediately recognized that a Smart Car was the perfect low-overhead solution for starting and maintaining a franchise – with no space rental fees.

A Santa Barbara native, Guerrera is a first-generation Italian-American from an entrepreneurial family. He attended the Art Institute in San Diego, where he met and worked with Chris Luna, founder of iGeeks in San Diego in 2012. After earning a degree in computer science and graphic design, Guerrera returned to Santa Barbara and opened the Santa Barbara location in 2014. In just two years, the local store has become a thriving business, offering iPhone repair in 30 minutes or less.