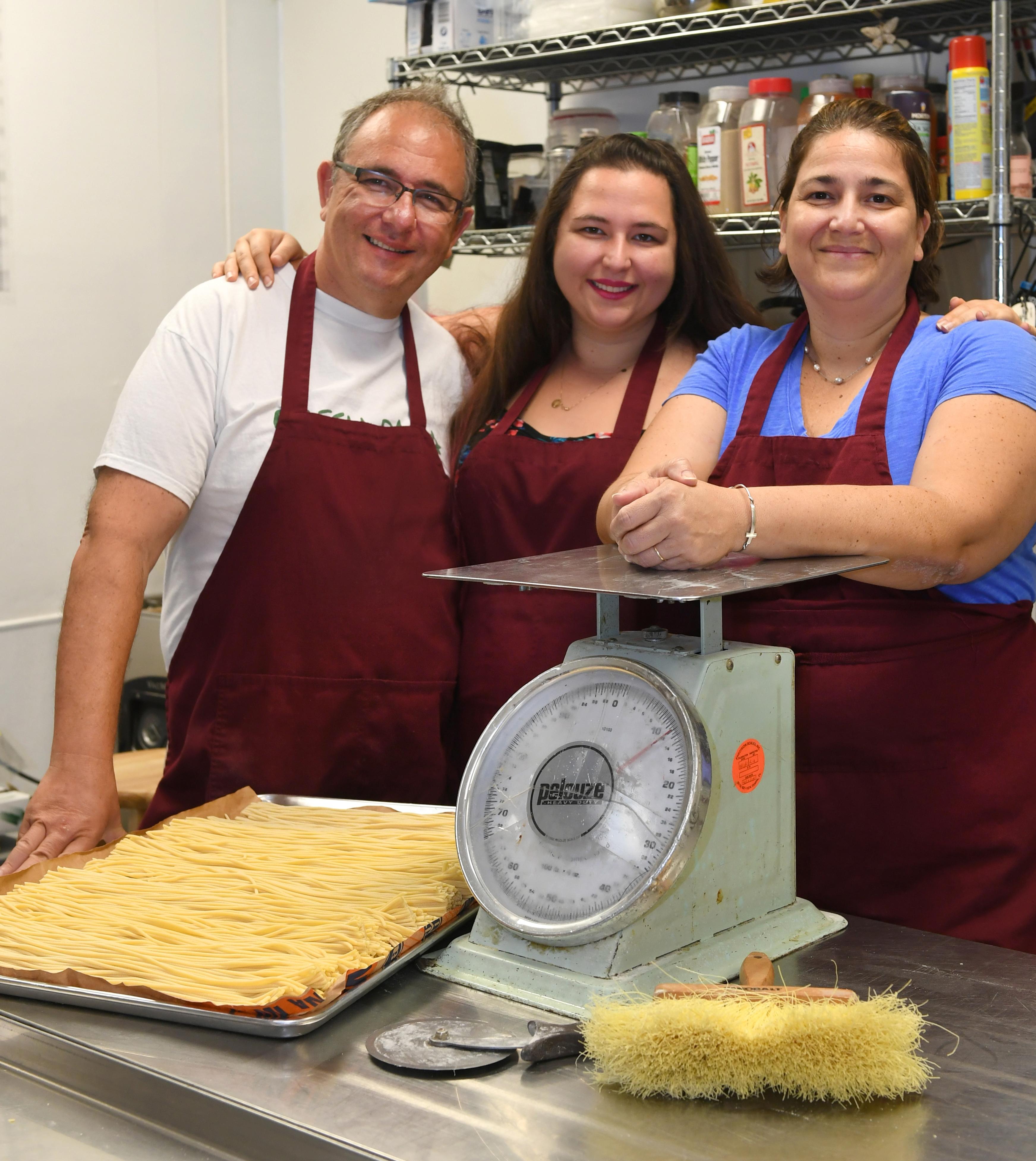 The Fochi family knows what goes into every package of Peperonata Pasta.

They’ve put it there themselves.

They are firmly aboard the small-batch, artisanal trend. The three of them and their four employees produce roughly 500 pounds of pasta per day from an 800-square-foot industrial space on Ashton Road, just east of McIntosh Road. Marina Fochi, who owns the business with her husband, Adrian, hand stuffs and labels each package before it hits the shelves. They have 20 flavors and can make 44 pasta shapes on their three machines. They’ve spent years perfecting the recipes and the process.

The family launched this business a little more than a decade ago after selling a similar operation in Maryland that they’d had since 2002. They wanted to be closer to Marina Fochi’s Florida-based mother but they also wanted to hold on to their pasta roots.

A product of a culture
When Adrian Fochi talks about his craft, he speaks as though he’s talking about a child he’s raised and, really, the business is a part of his family and culture. The Fochis are Italian immigrants from Argentina, where cooking is part of the lifestyle. He began cooking with his mother when he was a small child and he carried that craft with him when he moved to the United States in 1996.

Prepackaged foods are considered a luxury in Argentina and aren’t readily available. Meals are prepared fresh. Noodles in Argentina rarely come out of boxes or bags, and sauces are made from scratch. To Adrian Fochi, there’s no comparison.

Fresh-made noodles, he says, are to the dried, boxed ones as steak is to beef jerky.

The Fochis worked their way into farmers markets and drove up and down the Gulf Coast, passing out samples, hoping to attract wholesale clients. Their biggest client today found Peperonata Pasta at the downtown Sarasota farmers market. The manager of the Sarasota Whole Foods Market tried the pasta and asked to carry it in the store.

The Fochis expanded to the chain’s locations in Tampa and Orlando and eventually became a pasta provider to about 20 Whole Foods Markets. Detwilers Farm Market and several farmer’s markets also carry their products, and three years ago the Fochis opened their own retail store at 4141 S. Tamiami Trail that stocks their pasta and the empanadas they make and serves as a small café.

Riding a trend
They are growing with the increased popularity of artisanal, locally sourced food. Specialty foods, which include beverages, is a $127 billion industry that’s grown substantially in the past two years, according to an April report from the Specialty Foods Association. Total sales jumped 15 percent between 2014 and 2016 due to small-business growth, product innovations and wider availability through mass-market outlets.

“Consumer preferences for specialty-food products are growing at double digits, outpacing mainstream food staples,” Phil Kafarakis, the association’s president, said in a news release accompanying the report. “The products our members create appeal to consumers looking for authentic tastes and foods with fewer and cleaner ingredients.”

Peperonata Pasta’s customers appreciate the realness that comes in their pasta and empanadas, said the Fochis’ daughter, Stefania, who leads the empanada side of the company. Their products aren’t bogged down with preservatives and substitutes, and the ingredients are comparable to what their customers could buy fresh in the grocery store. They just arrive at the Fochis’ small industrial kitchen in much larger quantities.

No shortcuts
“For the pasta, we use fresh eggs, and they crack all of the eggs,” Stefania Fochi said. “We go through cases and cases each week, but we use real eggs.”

They feed the fresh parsley, mushrooms, garlic and beets into the kneading machine to mix it in with the pasta dough. Those natural elements give their standard recipe a pop of flavor and color. The purples, oranges and greens come from things like basil, carrots and ground sundried tomatoes instead of from a lab.

“If we say it’s basil, it’s fresh basil. If we say its garlic, it’s fresh garlic,” Marina Fochi said. “With lemons, we squeeze the lemons. We don’t shortcut with extracts.”

The family takes unmistakable care with both the ingredients and the process they use.

That’s as true with their empanadas as it is with their pasta. Peperonata Pasta has always made and sold empanadas, but that side of the business accelerated when Stefania Fochi, 28, graduated from culinary school and took over manufacturing the Argentinian food. She spent years perfecting and expanding on seven family recipes and grew the line to 25, with flavors such as steak and cheese, spicy chicken, and pepperoni. She’ll make as many as 1,000 in a single sitting. The family recently purchased a machine to help ease the process, but she still makes the stuffing and fills the pastries herself. Before that, her fingers and hands would swell with tendonitis from the work.

It takes 150 work hours each week for the empanada production and 200 hours per week for the pasta. The family only has four other employees at the kitchen, and that often means long hours for the Fochis. At the height of Sarasota’s busy season, they’ll work 16- or 18-hour days.

The $7-per-pound bags are so much more than the dried pasta that sells in $2-per-pound boxes on the grocery store shelves. There’s a life and a freshness to it that can only come from hours of labor.

But even with all the hours and strain, they don’t really call it that.

“It’s not so much work as it is a way of life,” Stefania Fochi said. “It’s about respecting ingredients and passing that on to people who are thankful. We’re in this world where real food is lost, and we make real food.”